Every analysis of Ethiopia’s civil war depicts it as a contest between ethnic federalism and nationalism. Yet the last three decades of Ethiopian history suggest this characterization of the conflict is misleading. Deconstruction of this misapprehension is important to accurately characterize the prospects for political reform and democraticisation the United Front of Ethiopian Federalist and Confederalist Forces offers.

Contrary to conventional wisdom, Ethiopia was not an ethnic federation under the EPRDF.

Contrary to conventional wisdom, Ethiopia was not an ethnic federation under the EPRDF.  The TPLF created the superficial appearance of ethnic federalism by re-naming Ethiopia’s regions along tribal lines. However, as every Ethiopian knows, the TPLF employed the same strong centralized control over the country as predecessor regimes. Despite what was on paper, it never devolved actual power to the tribal regions during its 27-year rule. Those regions were instead harshly ruled by TPLF proxies. Ethiopia was an ethnic federation in name only.

Given that the TPLF had nearly three decades in which to implement genuine ethnic federalism but never did so, it would be naïve to believe the TPLF would do it this time if it regained national power. To the contrary, structural contradictions in the United Front of Ethiopian Federalist and Confederalist Forces indicate a military victory would be likely to continue centralized, traditional ruling politics as long as the coalition remains dominated by the TPLF.

Centralized control of the population enabled egregious corruption by senior TPLF leaders that impoverished Tigrayans along with the rest of the country. Only the preservation of their opportunities for corruption at the national level can explain why those leaders failed to implement real ethnic federalism when they had ample opportunity to do so.

The TPLF is still led by surviving members of the same ruling clique, and there is no reason to imagine that, after decades of massive, well documented self-enrichment, they have lost interest in amassing more wealth. Their motivation for personal enrichment through control of the national economy still exists. It is therefore not hard to predict that the TPLF will take advantage of any military victory to restore its previous, privileged position.

The drive for personal wealth by top officials is behind the TPLF’s history of unstable relationships with allies and has important implications for the TPLF’s partners in the present conflict. First, it suggests that the TPLF’s Oromo Liberation Army allies, who have temporarily subordinated their resentment of the TPLF for its decades of cruel repression, are in for a letdown if their alliance were to win the war.

The OLA’s leaders assert that this time their relationship with the TPLF will be different. That might be true if the OLA were more powerful than the TPLF. But it is not, and the TPLF will never allow it to be. Therefore, because the TPLF’s motivation to regain national control is unchanged, and because the TPLF remains in the same position of relative advantage with respect to the OLA as it was to the OLF, the idea that the TPLF will treat the OLA differently is inconsistent with TPLF history, political culture, and the current power relationship between the two groups.

Given this dynamic, one should expect that any United Front victory will, as in 1991, see a brief honeymoon followed by a return to TPLF suppression of Oromo autonomy the moment TPLF control over the national economy is threatened. Before long, the OLA will again be branded a terror group and its members targeted by TPLF-controlled security forces. A cycle of popular protests and harsh repression will follow for several years.

These additions to the TDF alliance have diluted the TPLF’s power. This may be a necessary price for the TPLF to pay in the short term. However, the interests and ambitions of TPLF leaders, whose accountability for past misrule of their fellow Tigrayans is only deferred by the external threat, are threatened by power-sharing.

This paradox is exacerbated by the secessionist aims of some TDF elements. TPLF leadership opposes secession because the corrupt opportunities in controlling a small nation are less attractive than those of a big one. Again, if one remembers that personal financial ambition and the need to avoid answering for past misdeeds are concealed behind empty TPLF rhetoric about ethnic autonomy, it is almost axiomatic that the TPLF’s present leadership will carefully weigh its ongoing need for its Tigrayan allies against its fear of losing control to them.

If the TDF were to succeed on the battlefield, one should expect a point to come in which the TPLF’s balance between need and fear shifts, and the TPLF feels compelled to reassert its dominance over its Tigrayan partners. The TPLF’s 1975 liquidation of its Tigray Liberation Front (TLF) ally and its 1976-78 fight with its Ethiopian Democratic Union (EDU) partner in Shire suggests this inevitable reassertion of control over the alliance will again be violent.

The military nature of any victory by the United Front would also be more likely to contribute to prolonged national authoritarianism than reduce it. Studies by experts like Harvard’s Professor Erica Chenoweth and Ethiopia’s own history show that violent regime changes are much more likely to result in another dictatorship than those brought about by nonviolence.

Freedom House’s 2020 Global Freedom Score of 22 out of 100 for Ethiopia, while unacceptably low, is still a little better than the 12 out of 100 the nation earned under the EPRDF in 2017. But Freedom House still ranks Ethiopia as “Not Free.” The Prosperity Party has partly returned to authoritarian tactics. Security forces commit abuses during counterinsurgency and police operations as they try to contend with regional and intercommunal violence instigated by hatemongers seeking to provoke government overreaction. Intimidation of opposition members by Prosperity Party supporters marred the election. There are innocent political prisoners alongside those whose incitement to racial violence justified arrest.

Nonetheless, those attempting violent change have made the struggle for reform harder by approximately 50% according to the studies. It was nonviolence by Oromo and Amhara activists that delivered what limited political progress modern Ethiopia has seen, not violence. By abandoning a relatively successful strategy in favor of outdated, ineffective militancy as a means of political redress, the United Front is more likely to delay reform and perpetrate the dictatorial wrongs it seeks to right than it is to increase freedom for its members.

The United Front has many supporters in Ethiopia, but it is less popular nationwide than Prosperity Party despite the latter group’s many faults. The repression needed to maintain the TPLF’s revived hold on national power through subordinate ethnic regional parties would have to be more severe than the present government’s for the regime to survive for long.

When these factors are taken into consideration, a United Front military victory would likely prove disappointing and even dangerous to its supporters. Those United Front members unwilling to tolerate a new, highly centralized TPLF-controlled dictatorship should be careful about what they fight for because they might get it. As the Spanish philosopher George Santayana said, “Those who cannot remember the past are condemned to repeat it.”

If democracy, human rights and autonomy are what the TPLF’s allies and partners seek, they would profit by re-thinking their strategy and tactics. A leopard doesn’t change its spots. 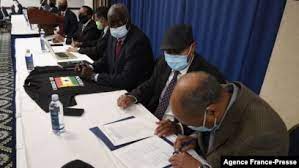